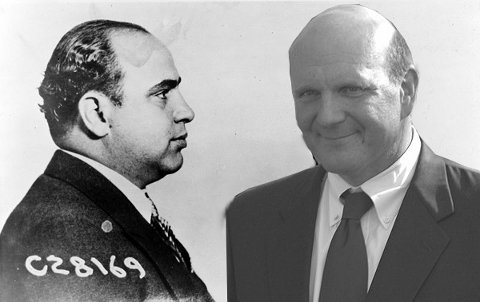 In relation to the lawsuits by proxy that we wrote about some moments ago, an obligatory discussion arises which revolves around accountability.
“In all seriousness, white-collar crime is the most expensive type of crime and a criminal investigation is long overdue…”

NewsWeek has kick-started quite a big discussion when it predicted that Steve Ballmer would be out in less than a year, being one of the worst-performing CEOs in his field. There were also many articles calling for the firing of Ballmer around March of 2008. But Ballmer does not deserve such gentle treatment after all the things that happened under his watch. NewsWeek misses the point:

NewsWeek writes, “Microsoft stock has dropped by nearly 50 per cent on his watch, lagging not just other tech companies but even the Dow Jones industrial average. Distracted by the Windows Vista fiasco, Ballmer has missed every big new tech market of the past decade.”

There is also this, still pretending that Microsoft is only “competing”.

According to insiders, Steve Ballmer has not been able to come up with any revolutionary ideas. Even within Microsoft, such feeling is palpable. If Microsoft wants to counter Apple and Google, it needs to go for a complete overhaul.

Yesterday alone we showed that Microsoft is frivolously suing Linux, its #1 competitor, by acting as a financier for lawsuits and paying for slanderous studies. They even attack charities. Some of it is akin to mafia tactics [1, 2, 3, 4, 5, 6], whereby Microsoft hires some dirty no-name men to do the “dirty job” and attack Linux. In all seriousness, white-collar crime is the most expensive type of crime and a criminal investigation is long overdue; the RICO Act applies, but sadly, rich people are rarely brought to justice in this system. Tax dodging is another good example of what these people can get away with, not to mention bribery as a business model (apparently too low in the list of an average policeman, who is more concerned about hungry shoplifters).

“In all seriousness, white-collar crime is the most expensive type of crime and a criminal investigation is long overdue…”In a just system, justice would be applied to the “Big Criminals”, not shoplifters. It is just sad to see that wealth and corruption are permitted to crush the lower class using the legal system which they pretty much control. It is there to facilitates their unaccountable business and the richer they are, the more powerful they become and the less likely they are to end up in jail. It makes them conceited and reckless.

The likelihood that Ballmer will ever be held accountable for his actions seems slim. Perhaps the only justice will be the self destruction of this business. Microsoft’s former shill-for-hire, Don Dodge [1, 2, 3, 4, 5] is now admitting that Microsoft is in deep trouble [1, 2]. Those who defend the abusive monopolist may wish to deny this, but as Joe McKendrick puts it, it is still just catching up with companies like Google where Dodge works now.

It’s been well reported that Microsoft is prepping for the upteenth fight-to-the-finish of its career, this time for dominance of the cloud frontier against arch-rival Google.

One of our readers, Yuhong Bao, has pointed out that someone in Slashdot had just labeled Google an “abusive monopoly” even though evidence is insufficient. But Microsoft’s crimes (which Ballmer should be liable for) go far beyond monopoly abuse and we have covered many examples over the past 3 years. This post is not a detailed indictment of what he did. █