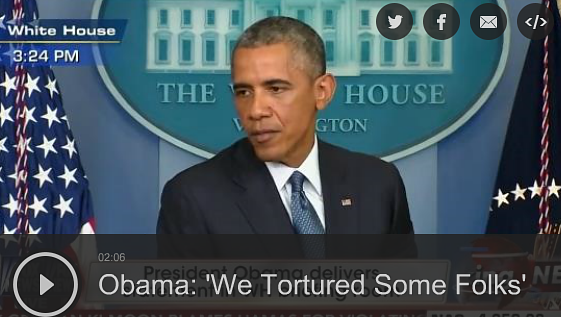 WASHINGTON — President Barack Obama bluntly acknowledged on Friday that the United States conducted torture in the immediate aftermath of the Sept. 11, 2001, terror attacks.

„We crossed the line and that needs to be understood and accepted. And we have to, as a country, take responsibility for that so we don’t do it in the future,” he added.

Addressing reporters at the White House, Obama commented on a Senate investigation into enhanced interrogation techniques conducted by the Central Intelligence Agency. The investigation is expected to be declassified some time in August.

According to a new CIA Inspector General’s Office report, agency employees in 2009 hacked Senate computers being used to compile the investigation. Some lawmakers on the Hill are calling for CIA Director John Brennan to resign over the matter, but Obama deflected those concerns on Friday.

„I have full confidence in John Brennan,” he said.

22 Iulie 2014
← Informatizarea României – o puşculiţă electorală. De la Dan Nica, la Vasile Blaga
7 August 2014
Thanks dad! Bill Gates treats his family to a Mediterranean vacation on board a 450-ft superyacht complete with a submarine, 12 state rooms and a helicopter to fly them to and from tennis →